The Gay Card was performed live on Facebook on April 18 and 19. If you missed it, you can watch below a recording of one performance.

''Fuck boys and cold pizza slices. Set in a conservative, small Canadian city, The Gay Card is a play about three gay men who grapple with love, consent, and the hyper-sexualization of the queer community in this modern snapshot of online dating and hookup culture.'' The Gay Card invites audiences into the lives of three young gay men who are searching for love and connection. Each of these men have their own experiences and difficulties attempting to thrive in the age of digital connection. The Gay Card examines queer relationship dynamics in a way that is at times funny and at other times heartbreaking. 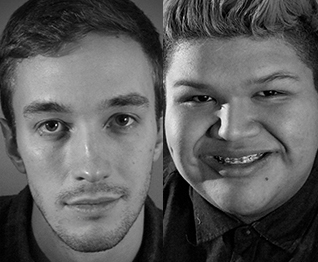 Logan Martin-Arcand is a queer Indigenous theatrical artist from Saskatoon, Saskatchewan. Logan has over 20 theatrical credits to his name as an actor, director, designer, producer and writer. Some of his recent credits include producer/writer for The Gay Card, writer/actor in Politics of Happiness (SexualSpaceWalk Theatre, 2018), costume designer for Reneltta Arluk’s Pawakan Macbeth (Akpik Theatre 2017, 2020), costume design for Tony Kushner's The Illusion (Greystone Theatre, 2017) and as Vernon Little in Vernon God Little (Greystone Theatre, 2014). Logan has a Bachelor of Fine Arts Honours (Theatre Design / Acting) from the University of Saskatchewan.

Mitchell Kent Larsen is a queer actor, musician, writer, and dancer living in Saskatoon, Saskatchewan. He trained in musical theatre at Grant MacEwan University in Edmonton, Alberta. Previously, Mitchell has performed original music at the 2019 Saskatoon Pride Mainstage; acted in Donald Campbell’s The Narrow Path and Cristián Soto's Santiago High Tech; and collaborated on the creation of multiple multidisciplinary shows such as Contradictions, Uncertain Times: a Mid-Apocalyptic Cabaret, and Howl. This year he is looking forward to dancing in a collaboration between Free Flow Dance Theatre, Saskatoon Opera, Saskatoon Symphony Orchestra and Toronto’s Collectìf, as well as performing at the Remai Modern Gallery in a new experiential movement tour inspired. Mitchell is also a co-host on the Saskatoon-based theatre radio program Mom, I’m a Thespian.