This project was presented on YouTube, May 1st, 8pm central 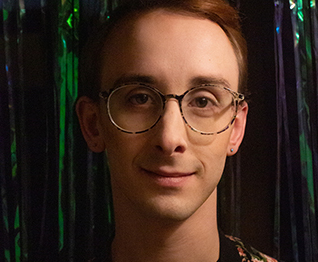 Jonathan Mourant is a transdisciplinary performer, producer, and also a robot learning how to be human. They have been improvising for just under a decade and have performed and learned at festivals and workshops across Canada, including the Winnipeg Improv Festival and Toronto SketchFest. This year, Jonathan wrote and directed Here Together for the 2019 Winnipeg Fringe Festival and created Jon After Hours, an experimental late-night talk show featuring local personalities. Recently, they have begun performing drag as Nora Vision, and are thrilled at the opportunities to combine improv, theatre, and drag into their own unique performance.