Giant mine was established in the early 1940s and was abandoned in the late 1990s. There are viable reports pointing to the deaths of Yellowknives Dene First Nation children in their home community that traced directly to arsenic poisoning and, as a result, a small financial compensation was paid out by the mining company to the families that lost loved ones.

A study done by the Indian Brotherhood in the 1970s showed ninety percent of Indigenous people living in proximity to giant mine had high levels of arsenic in their systems when tested with hair samples yet mine production continued.

There is no known solution on how to effectively contain the 237,000 tons of deadly arsenic underneath the earth from seeping into northern waterways and killing everything in its path, essentially affecting the entire world.

The Giant Mine truly stands up to its name. 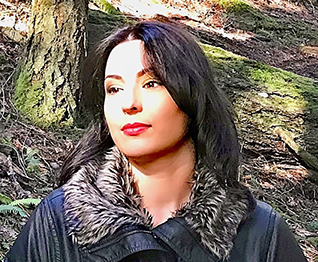 Katłįà is an Indigenous northern woman from Yellowknife, Northwest Territories. She is the author of Northern Wildflower a memoir published in 2018 with Fernwood Publishing. She has a fictional fantasy novel set to be released in the fall of 2020 with Fernwood Publishing entitled Land-Water-Sky. Catherine is currently a law student at the University of Victoria in the Indigenous Juris Doctor Common Law program.