In the satirical horror-comedy Click Bait, Emma is a filmmaker who, after years of hard work on her politically driven short films, has gotten herself nowhere but a deep financial rut. After a particularly hard night during which she is rejected for a low-level internship due to her lack of social media following, she turns to a Reddit forum. There, she meets Grace: a law student with ambitious plans, forced into selling her panties on the internet to make rent. After a drunken night of private messaging, the two decide that they too will seek infamy, even if it takes infiltrating the StreamTeam (a group of five of the internet’s top influencers) to do it. What Emma doesn’t anticipate is getting seduced into participating in the violent revenge that Grace has in store, truly proving that “violence gets views.”

Click Bait is a multimedia web series that uses live streams, YouTube videos, video diary entries, and texts to tell the story. The seven-episode series was born out of a desire to see just how much is possible in the realm of collaboration when none of the actors are face to face. In the midst of social distancing and self-isolation, MacMullin and Pappas-Kemps want to explore the sense of community and bonds that can be formed from behind a screen, as well as the fierce competition, aggression and apathy: a mirror of the outside world. “Click Bait” is “Heathers” for the TikTok generation.

You can stay up to date on just theatre at @justtheatreco. 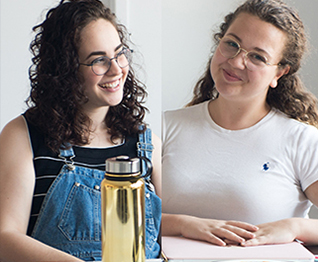 just theatre was founded by Nastasia Pappas-Kemps and Cait MacMullin. Their inaugural production, The Red Nose Show was mounted in December 2019.     Nastasia Pappas-Kemps is a Toronto-based writer and actor who studied at Concordia University in playwriting before completing her actor training at George Brown Theatre School. As a playwright her work has been mounted with We Are One Theatre, and Ergo Arts Theatre. Nastasia is also an award-winning filmmaker whose short films have been screened at the Scholastic’s Festival, Next Wave Jump Cuts, Toronto Youth Shorts, Big Screen Student Festival, and Take21.    Cait MacMullin is an actor, producer, and playwright originally from Cape Breton, NS, who is in the midst of a strange last month of training at George Brown Theatre School. As a producer, Cait has worked with such companies as Dusk Dances, Crow’s Theatre, Esie Mensah Creations, and Angelwalk Theatre, among others. Cait’s plays have been workshopped by Eastern Front Theatre and Kostume Kapers Children’s Theatre.