By Laurel Thomson and JoJo Rideout

Not a tree in sight...
And the air is so pure, so FULL...
The sun is high and not a cloud in this most vast, breathtaking horizon.
This is our first time, JoJo and I, and already we are experiencing something unlike anything either of us have felt or seen before. We have arrived in the North! It is beautiful and for us, other-worldly.

We’ve been invited to teach a group of 15 artists in voice-body connection at Qaggiq School of Performing Arts in Iqaluit. We can’t quite believe we are here!

Though this trip is our first time up north, it isn’t the first time a collaboration between the two schools has taken place. A partnership between Qaggiq and NTS began in 2016.  Martha Burns, actor and NTS teacher of first year Acting 2010 -2018, had worked with Nunavut artists from Qaggiavuut, the Nunavut performing arts society. She introduced Qaggiavuut to NTS. In 2017, Martha and Carlos Rivera, graduate of our Indigenous Artist in Residence program, worked with Nunavut artists on Kiviuq Returns, the first Nunavut Inuit theatre production to be performed entirely in Inuktitut.

Carlos had also worked on Qaggiavuut’s production Arctic Song, and some may remember when Qaggiavuut visited us last February to perform Arctic Song at the St. Denis campus when they were here for the 2019 Folk Alliance International Conference. Remember the delicious Arctic Char and moose meat tacos, and Kuuri singing so beautifully on his guitar in the front lobby?

Ellen Hamilton, executive director, and Laakkuluk Williamson Bathory, Artistic Director, pick us up at the airport and take us back to their performance hub. I am in awe meeting Laakkuluk as I had seen her show, These Sharp Tools, in Montreal and had been blown away by her Greenlandic mask dancer. She was so formidable on stage! In person, she is so kind and gentle. On the way to the hub, she tells us she had to shoot a polar bear over the weekend because it came so close to her house. Wandering, curious, young bears haven’t learned yet to be wary of humans and it’s not unusual to have to deal with them this way. Of course, it is quite emotional to kill a bear in self-defense but Laakkuluk uses her incredible skills: she skins the bear, divides up the meat and feeds several families.

We aren’t in Montreal anymore.

Meeting the artists is thrilling. Over a home-cooked meal of fresh Arctic Char, we meet the star of Atanarjuat: The Fast Runner, Natar Ungalak; he has flown all the way from Igloolik to participate in this workshop! He is not alone; at least half the participants are flown in from remote Nunavut communities. The opportunity for training is recognized as hugely important, and being so isolated limits the possibilities of ongoing classes, so intensive workshops are the best way for the artists to keep honing their skills. Often these intensive workshops lead into rehearsals for a show, maximizing artists’ time together and the cost of travel. JoJo and I quickly realize what we take for granted here in the south: access to workshops and space to rehearse and the notion that we can, with relative ease and minimal expense, get together to rehearse a show. It is a very different situation up north. Ellen has been working long and hard to try and secure enough funding for a proper rehearsal and performance space for Qaggiavuut. She tells us the artists envision the space as having a wide reach, something for all the Iqaluit community to share and participate in.

Qaggiavuut is currently housed in a lovely bungalow close to the center of town with a newly-added extension which is our workshop space. It is bright with a beautiful view of the rock-strewn horizon and endless sky. Though small, it is a warm and welcoming room to work in, and just off the kitchen! Perfect.

Not all the participants are members of Arctic Song. Some of them are locals from the Iqaluit community who want to share in this training and to expand their own creative skill. Over the next four days, this wonderfully diverse group of artists practice breath connection, resonance, articulation, muscularity of speech and through much laughter share in storytelling and poetry. 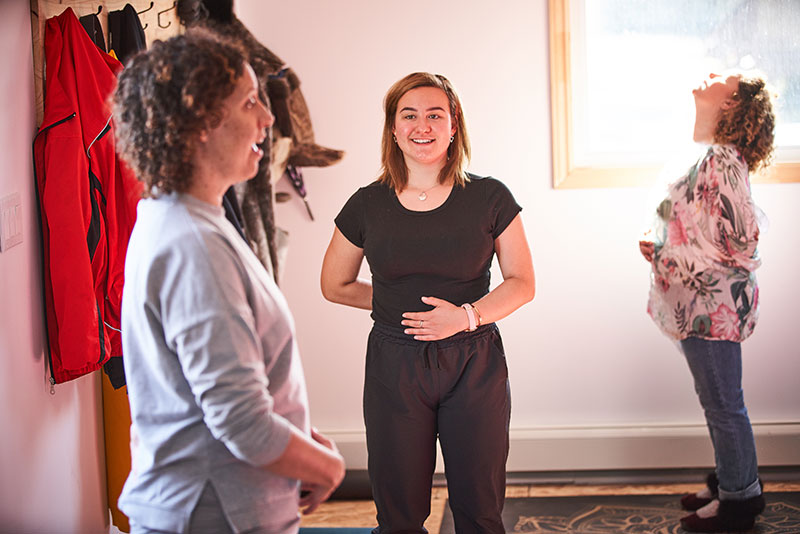 It is Wednesday and the warmest day of the week (17 degrees and endless blue sky) and Ellen suggests we all head to the river to end our day by the water. Driving out to Grinell Territorial Park is unimaginably beautiful....so much rock and dark orange hues of the dusty earth, and sometimes large, white canvas tents dot the landscape. People here take advantage of the easy access to nature....many have tents and boats. One of the women who works in our hotel tells us she and her husband sometimes spend summers loading up their boat and heading out onto the water fishing and picking berries for a month at a time, coming into town to load up on supplies, only to head back out for another month. It is paradise!

At the river, JoJo leads us through a voice exploration while we sit on the shore, gazing out across the endless horizon. Sitting on the rocks, we find our breath, connect to it, begin to hum, increasing our resonance and coming onto open sound. The creative force takes over and we simultaneously get to our feet and start to speak a Haiku the group created together about a cold wind and a raven. Kuuri, in a great moment of inspiration jumps to his feet, takes off his shirt and leaps into the water! From there he starts to speak the Haiku from the water back to us on the shore. Lois and Alika start to throat sing while the rest of us drink up this magical moment.

Friday night, our last evening together. The artists from our workshop who are involved in Arctic Song have been rehearsing all week, having taken the opportunity of being together to strengthen their show and tonight they are going to perform it for the Iqaluit community. Simon Brault, CEO of Canada Council for the Arts is in the audience as part of his tour of the Arctic. The place is so packed people have to sit in the kitchen and view the show from there. Arctic Song is full of ancestor songs, music forbidden at the time of colonization and now celebrated, carefully placed in the hands of these artists who are fast becoming the keepers of this complicated, classical Inuit music. The show is not only a chance to hear something long forbidden, it is also a huge part of the healing process, and judging from the packed house, it is clear the community hungers for it. Late in the evening, we all drive out to NuBrew, a brew pub on the edge of town, and we celebrate with flights of beers.

Boarding the plane the next day, our head and hearts full of all that has taken place, JoJo and I gaze out for a last look on this vast horizon, dreaming with our sister school, hoping they can soon build their performance space and wondering, imagining the possibilities... who knows where this can go?