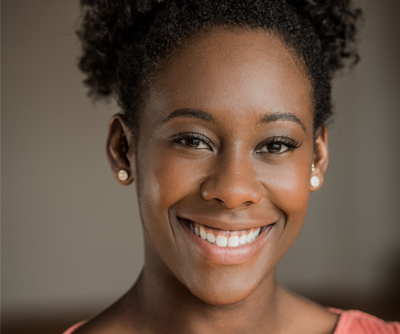 I’ve always believed that art is inherently political. When you make a piece of art you’re saying something about the way you think, the way you see things, the ways in which things have impacted you. Being an actor of colour I’ve learned that my body, in its simplest form, is a political statement. The roles I play have the potential of taking on a different meaning just because of my blackness. Studying at NTS has opened my mind to how I view myself as a performer and as a woman of colour. It has helped me come to accept the things I cannot change but also find the power that those very things can possess

In the last year, I changed my approach of how I view and study the characters I play. It becomes very easy to describe what a character likely looks like based on first impressions in a reading. It’s also very easy (and I’m sure many actors of any background would agree) to describe a character that looks nothing like ourselves. Yes, we inhabit these fictional lives for a period of time, but we don’t have the luxury of changing our bodies to conform to these ideas of what this person “ideally” looks like. It was then that I realized the importance and necessity of seeing myself in these characters. Not just Shauna in the abstract sense but also in the physical sense. Currently, my class is performing in a production of "The Threepenny Opera," and indulging in the addition of “young black woman” to my own personal character description has been a true pleasure. Our director Eda Holmes was a great advocate for us as actors having a say in how our characters were portrayed.

One of the characters I play, Jimmy, is traditionally played by a man, and Eda was very encouraging in my choice to play Jimmy as a woman (because why couldn’t a “young black woman” be the fourth member of a super cool East London gang?!). This support meant the world to me because going forward I want to bring myself to the forefront of all of the work that I do. Each role I take on will always have an essence of Shauna in it. It’s unavoidable.  So, it’s not a matter of fitting myself into a narrow idea of who the character is or could be, but finding the similarities between us and using those likenesses to build my own interpretation of the role. The Visceral Need to Play

A New Power for Good

A story of fear and land